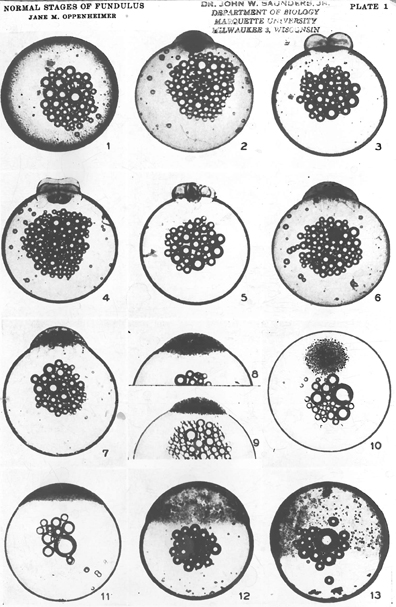 A normal table consists of a series of chronological drawings of stages of development for a typical embryo of a certain species. The series of drawings creates a visual standard for development in that species by dividing embryological development into stages with distinct features. The creation of normal tables began in the late nineteenth century as a way to organize the field of morphology. As the field of embryology moved from a largely comparative to an overwhelming experimental approach, normal tables became a necessary tool, both to provide a control for individual experiments and to set a standard of communication between laboratories.[1]

In the latter part of the nineteenth century, morphology was a primarily comparative science that stressed the importance of similar structures across different species. With the rise of Darwin's theory of evolution, many scientists interpreted the similarities in the development of vertebrate embryos as evidence of common ancestry.[2]  Ernst Haeckel, a prominent German Darwinist, championed his 'biogenetic law' claiming that  "ontogeny recapitulates phylogeny"[3] 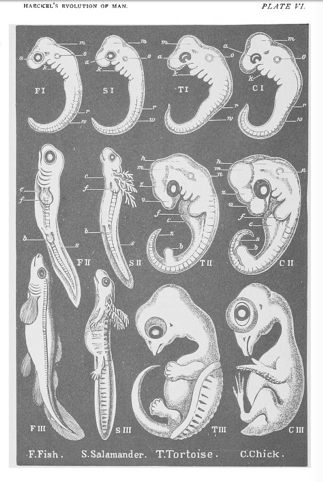 Haeckel thought that the development of an individual organism (ontogeny) mirrored the evolutionary history of that species (phylogeny). In order to support his theory, Haeckel drew embryos and arranged them into plates that show 'early,' 'middle' and 'late' stages of development But his opponents accused him of idealizing the images to show greater similarity than was actually present, and his biogenetic theory was eventually discredited.[4]  Regardless of his interpretation, Haeckel's format of displaying embryological drawings by dividing them into discrete stages influenced the layout of what would become normal tables.

Haeckel's main opponent, a German anatomist named Wilhelm His, was the first to use the phrase 'normal plate,' Normentafel in German, to describe a series of drawings.[5] His valued descriptive  accuracy, and though he began by describing 'stages' of human development, based on aborted human embryos, he soon abandoned this idealizing system and "simply arranged representatives in order". The term 'normal' comes from His' idea of a norm, or the "relations of form and size that define each stage" that characterized his initial efforts.[6] One of the main ideological conflicts in the development of normal tables was whether one presented each image as an accurate depiction of an individual embryo, or an idealized consolidation of many embryos. His favored the former, which gave a greater degree of scientific accuracy, but also complicated the field of comparative morphology by introducing innumerable variations. Comparisons across species became more difficult, since contrasts could be due to individual variation in development, and not a phylogenetic difference.

By the 1890s, embryology gained popularity at European universities, and many scientists created their own versions of a 'normal table' for the organisms they studied. However, these tables were not united in any way, and their divisions depended on the arbitrary criteria of the researcher and the organisms the researcher was studying. Some scientists differentiated stages based on age, others on size, yet other on the development of specific organs¾resulting in a information that could not be reliably compared.[7] 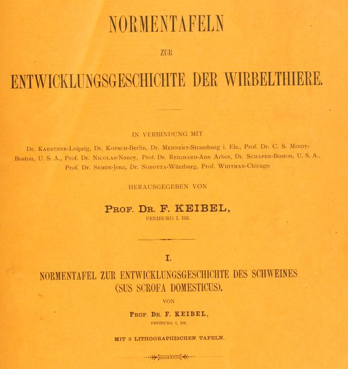 In 1895, Franz Keibel, a German scientist, called for contributions to an encylopedia he was developing called the Normal Plates of Development of the Vertebrates. Keibel's mission was to re-evaluate the information collected in the earlier years of embryology, gather new and accurate information, and present these findings in a series of volumes that would allow scientists to accurately compare development between and among species. The plates included in his volumes laid the foundation for the creation of normal tables for the next hundred years. 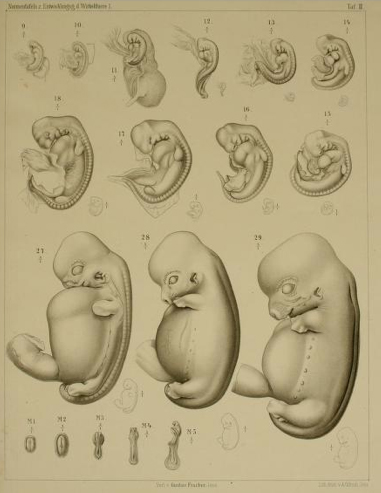 The volumes came to consist of three plates per species and a small amount of text describing the plates, two of which were showed the development of the "external morphology of individual embryos," and one plate that highlighted specific aspects of the early stages. Embryologists noted that if they studied many embryos of the same species, there was considerable variation among them, which led one critic of the project to state that "the statistical ideal of a Normentafel would never be achieved." But Keibel insisted that his normal tables were of practical importance, and that a statistically significant study would require far too many embryos.[8]

The methods of embryo collection were as varied as the species studied, ranging from  fetal deer that Keibel found with hunters in Germany  to a type of lungfish that was first served to a scientific expedition in South America. Although the stages used differed among the contributors, Keibel insisted that the volumes were a success, citing increased evidence of "correlation and variation".[9]

By the twentieth century, embryology had moved toward experimentation. Normal tables were now used as standards to show embryological development "without experimental intervention."[10] Many experiments used animals that were not covered by Keibel's experimental tables, leading to a resurgence in the creation of normal tables. While creating normal tables for Amblystoma, a type of salamander, Ross Harrison received a demand from an anatomist to publish his findings, because without a published normal table, the anatomist's experimental findings would lack verification. These tables were meant for laboratory use and consisted of a few pages of drawings, divided into stages defined by external characteristics; 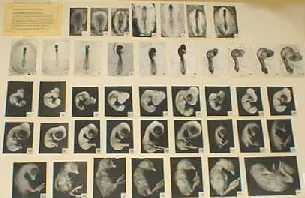 Viktor Hamburger and Harrison spearheaded the development of these new tables. Later Hamburger worked to integrate the increasingly accurate medium of photography into his tables of the development of chick embryos, but also drew important structures. Hamburger and Hamilton's Gallus gallus (chicken) tables allowed cross-laboratory communication in chicken embryology and contributed to the designation of chicken as a NIH model organism.[11]

William W. Ballard, an embryologist at Dartmouth and an instructor with Hamburger at the MBL embryology course, researched and published a number of normal tables of fish species during his lifetime, including the American paddlefish (Polyodon), the brook trout (Salvelinus), salmon (Salmo), perch (Perca), sturgeon (Acipenser), and the Zebra fish (Danio).  He also experimented with staining procedures for killifish embryos (Fundulus), which were widely used at MBL.  Jane Oppenheimer published the photographic normal table for Fundulus (see the image on the top right of this page), while Philip Armstrong, director of MBL from 1950 to 1966, and Julia Swope produced a drawn normal table.  Images from stage 24 of the photographed Fundulus, the drawn Fundulus, and the stained Fundulus are included below. 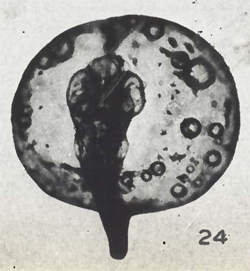 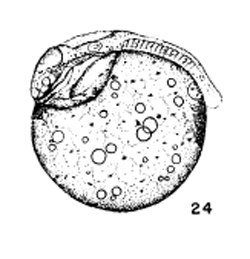 The stained image is from a slide of a transverse section of the embryo made in 1949 by Ballard using Bouin's A as the stain.  The normal stages were typically determined by direct observation.  Embryos were sectioned and stained in order to correlate organogenesis and other internal developments with the visible features of each stage.   Ballard's original microscope slides for his normal tables allow us to compare the produced and often idealized visual standard of each normal stage with actual specimens used in their production.